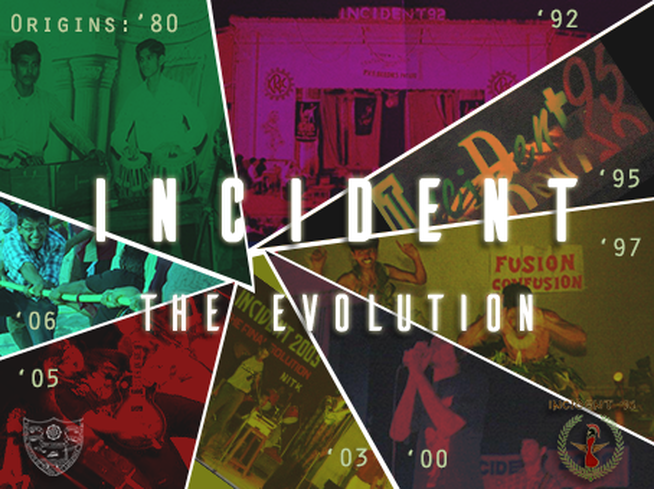 It was one such day thirty years ago when dark gloomy clouds had gathered around the western coast of India as was the norm then. Amid the lightning and thunder that personified the lights and music that was about to split the earth open, a legend was born. KREC had always displayed a flair for arts and culture; the feeling boiled over to give birth to a legend.

On 17th September, 1980 when the incident occurred. On the shoulders of Umar Teekay, Incident was kicked off with a budget of 10000 rupees, primarily for the KRECians and the colleges near the region. Music, dance, drama and of course, movie screenings were the main events of celebration. Little did they expect the “Incident” to become the phenomenon that it is today.

Unbound potential fueled by energy of a thousand students of one of the best colleges of India can only explode into awesomeness and it did happen with Incident. The zest of the students and propelled the fest faster than a rocket-ship. By 1985, Incident events were split between the SAC and the SJA. By the beginning of the 1990s, the fest had become a legend among the Mangaloreans; incorporating new norms and trends every year
In 1992, one of the biggest industries of Mangalore then – PVS beedies Pvt. Ltd. Sponsored Incident when it created history by holding Fashion shows contests for the first time. Bell-bottoms were just being pushed off for denims but Incident is never bound by norms of time. Featuring performances from many teams from college and outside, it was truly a spectacle that was never witnessed before. Above all, Incident remained an fest where culture was celebrated at its fullest level with no bounds and limits.
All that changed with a revolutionary idea in 1997 when Incident had a 'theme' for the first time. Incident: Fusion Confusion was a broad term, but it opened new doors for the creativity of the many who awaited the fest every year.
A glorious millennia was about to end marking the beginning of another. Incident wasn't spared by the Y2K bug and was held just at the merger of the two millennia marking Incident 2000.

Incident in the 2000s was Gen Ys Incident where new cultural norms were arising everyday. One such event was the integration of sports into Incident with the introduction of Basketball and football tournaments and events like pool splash. However, the biggest revolution happened in Incident 2005 with the introduction of “Pronites” that took celebration to a whole new level with the Parikrama playing their groovy tunes to the cheers of the students.
The most obvious development happened in 2006. It was like when Newton invented gravity; people felt amazed that they hadn't thought of something that so obviously existed. Yes, Incident 2006 marked the first “Beach events” that were held.
Incident 2009-2015 were Incident's golden years where the fest went country wide. Participation from colleges around Karnataka and around the rest of country were at a new high. Appearances by the biggest celebrities of Bollywood like KK, Sunidhi Chauhan and Vishal-Shekhar were just one night of the extravagant five day fest held in the blistering heat of Mangalore summer. Musicians and bands of exquisite caliber and the concepts of world fest made Incident the largest fest of south India. 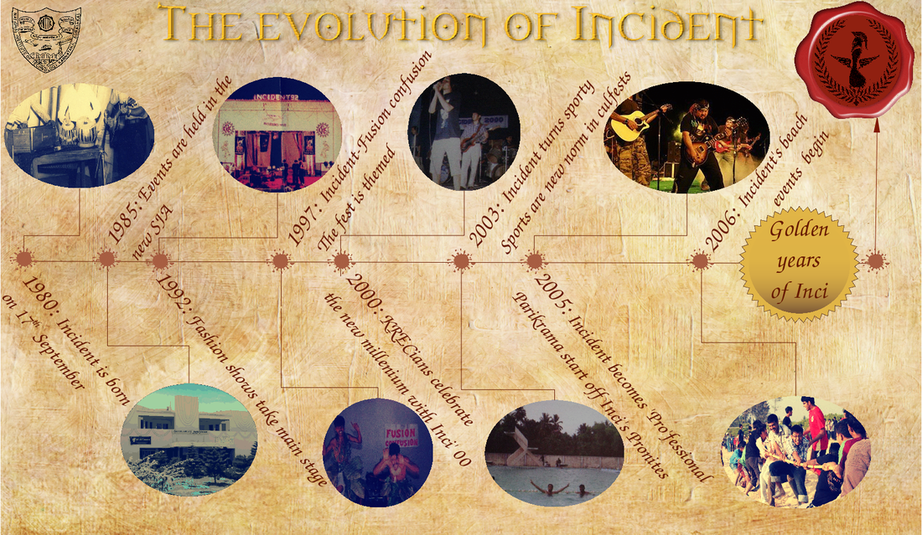 Incident '16 : the mythological edition is not just about mythologies and legends around the world, but is targeting to be a legend in itself.